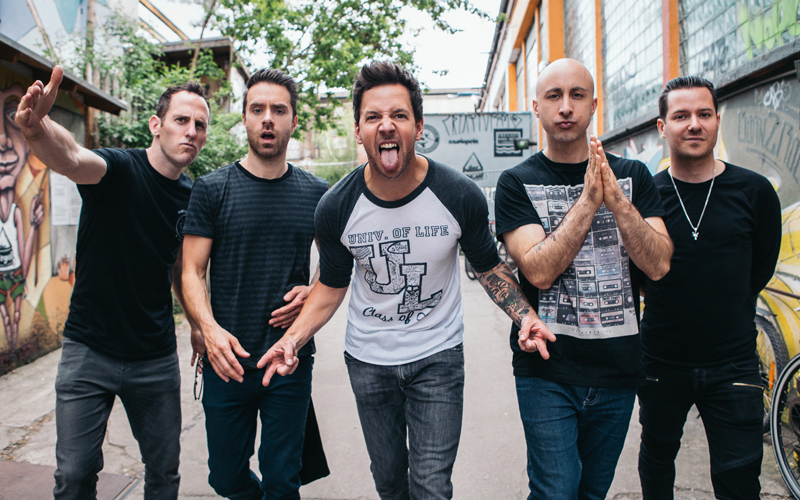 One of the world’s top pop-punk groups, Simple Plan is back in Brazil in 2018! After releasing nine albums and selling 7.5 million copies, the band returns to the country celebrating 15 years of their first album release No Pads, No Helmets … Just Balls, which will be played in its entirety.

The No Pads, No Helmets … Just Balls 15th Anniversary Tour in Brazil takes place on May 25, in Porto Alegre, at Pepsi On Stage; May 26, in Curitiba, on Live; May 27, in São Paulo, at Audio; on 30th May, in Rio de Janeiro, at Circo Voador, and on June 1st, in Uberlândia, at the Arena Sabiazinho.

Tickets will be available in pre-sale for the fan club on April 2nd and to the general public starting on April 3rd at livepass.com.br.

In Rio de Janeiro, tickets will be available in pre-sale for the fan club on March 28th and general sale on March 29th at ingressorapido.com.br. Check out more information at INFO below.

“we felt it was important take this opportunity to look back and celebrate the amazing adventure we’ve had as a band and as friends…”No Pads, No Helmets…Just Balls” changed everything for us and we are so excited to play all these songs again and relive a time in our lives full of so many amazing memories.” explain the band.

The presentations in Brazil are part of the Concerts Series Live Music Rocks, promoted by MOVE Concerts.

Throughout nearly two decades of career, Simple Plan has garnered achievements like the top of the Canadian charts with “Welcome to My Life” and the double platinum certificate with the single “Summer Paradise”. The band also included in their curriculum the participation in Hollywood soundtracks like “Twelve is Too Much” and “Very Crazy Friday”. In Spotify, the band has more than 1.5 million fans.

Last year, the band released their latest album, Taking One For The Team. Produced by Howard Benson, it features hit tracks such as “Boom”, “Opinion Overload” and “Singing In The Rain”. The album debuted at the top of the iTunes charts in 10 countries, as well as appearing in the Top 10 of the same platform in another 25.